Last night at 9:33PM the City of Lynn Election Office sent out their unofficial results for Lynn from yesterday’s election. They will send out official numbers with percentages after they have been confirmed, and we will post those as well.

Voter turnout this year was massive. Over 18,000 Lynners voted early this year via mail or in-person, according to Lynn City Clerk & Chief of Elections Janet Rowe. Several long lines and temporarily broken ballot machines were reported at some polling locations yesterday in the city. 35,139 registered voters cast ballots in this election, 62.70% of total registered voters (56,041) in the City of Lynn.

Below are the results for the Presidential, Congressional, & U.S. Senate races along with ballot questions for the City of Lynn.

The Associated Press has called many races in Massachusetts. Please keep in mind that many cities & towns both in MA & across the nation are still counting, so results can and will change. All of the results listed below are as of 11:30am today.

Across the state Biden took Massachusetts with 65% of the vote, an expected win. Markey & Moulton won their reelection campaigns, with 66% & 65% of the vote respectively. Question 1: “Amend Right To Repair Law” passed with 75% of the vote, a strong win for that ballot question. However Question 2: “Ranked-Choice Voting” is proving to be a much closer race. Even at the time of writing it is too close to call with 54% against and 45% in favor.

Across the nation there is a lot of uncertainty. Many states were called by the AP last night, but a few states have not been. Right now Joe Biden is narrowly beating incumbent President Donald Trump in the popular vote 50% to 48%. The thing to watch though is the Electoral College, which was the key to Trump’s victory in 2016 after losing the popular vote. Currently Biden is in the lead with 238 Electoral votes with Trump at 213, 270 is the number needed to win the Presidency. The states of Alaska, Nevada, Wisconsin, Michigan, Pennsylvania, North Carolina, & Georgia still have not been called–and they are not expected to finish tallying all of their ballots for some time.

To view detailed election results for Lynn please click here to be taken to the City of Lynn Elections Office webpage.

Special thanks to MassAccess for providing these updates. 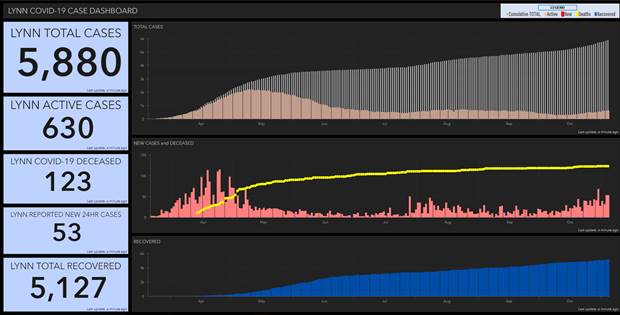 From Mayor McGee’s office: The Lynn Public Health Department has confirmed that as of today, the number of active, confirmed positive COVID-19 cases is 630 with 53 new cases today. 5,127 Lynn residents have recovered and 123 have died. The total number of confirmed positive COVID-19 cases in Lynn since March 21, 2020, including those who have died and recovered, is 5,880. Please visit the City of Lynn COVID-19 Data Dashboard which is updated daily.

o    Parking Lot behind Fire Station at 725 Western Ave, off of Federal Street

o    Residents who have been tested for COVID-19 through Fallon Ambulance can call 617-765-0176 with any questions related to your COVID-19 test results.