The City of Lynn was awarded $199,090 in climate change funding through the Commonwealth of Massachusetts’s Municipal Vulnerability Preparedness (MVP) Program. Lynn was designated as an MVP Community by the State in 2019. The program provides communities with funding and technical support to identify climate hazards, develop strategies to improve resilience, and implement priority actions to adapt to climate change.

The City of Lynn was first awarded a MVP Action Grant in 2019 to look for opportunities to implement nature based solutions within the Strawberry Brook watershed to specifically reduce storm water flooding and urban heat island effect. This funding will allow the City to build upon that progress through two projects, the Boston Street Green Infrastructure pilot project and the Barry Bark / GEAA field storm water and flood mitigation plan.

“Flooding has been a major concern in Lynn for a number of years, specifically in the area of Boston Street and Barry Park,” said Mayor Thomas M. McGee. “With the technical assistance offered through the MVP program, we will be able to invest in proactive mitigation projects that will allow us to do our part to start to limit the impacts of climate change and greatly improve the quality of life for members of our community.”

The neighborhoods along Strawberry Brook will see direct advantages such as reduced flooding, better air quality, improved urban landscape and a reduction of urban heat island and better water quality as a result of this planning and investment. The concept plan involving Barry Park will also account for new green infrastructure such as sport courts and storm water playgrounds that will both support recreation and storm water management. Both projects are expected to be completed by June 2021.

The Fund, an initiative of the six U.S. Regional Arts Organizations (Arts Midwest, Mid Atlantic Arts Foundation, Mid-America Arts Alliance, New England Foundation for the Arts, South Arts, and Western States Arts Federation) was made possible by The Andrew W. Mellon Foundation. It was created in response to the impact of COVID-19 on the nation’s arts infrastructure and supports organizations with recovery and planning capital for a post-pandemic future. The program was funded nationally through a $10 million grant from The Andrew W. Mellon Foundation and amplified in New England with funding from the CARES Act.

The COVID-19 pandemic has had a devastating impact on the creative sector. An ongoing study from Americans for the Arts estimates financial losses to nonprofit arts and cultural organizations at $10.2 billion, with an estimated loss of $10.7 billion in event-related spending by arts audiences (as of August 3, 2020).

Despite the numerous challenges noted by the 135 Fund applicants, several opportunities were surfaced, including:

With awards ranging from $10,000 to $50,000, the New England Arts Resilience Fund prioritized organizations, communities, populations, and art forms that have historically had less access to major financial resources for sustainability. The Fund sought in particular to support organizations that are led by and deeply engage communities of color. 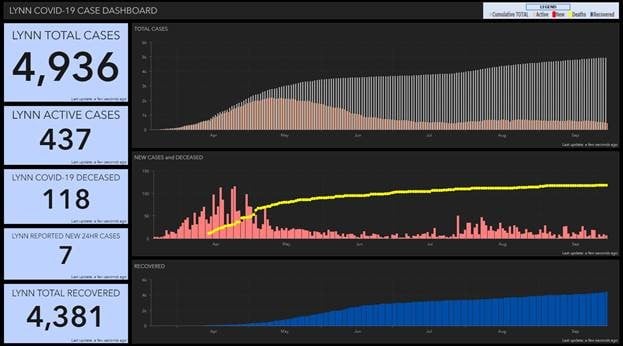 From Mayor McGee’s office: The Lynn Public Health Department has confirmed that as of today, the number of active, confirmed positive COVID-19 cases is 437 with 7 new cases today. 4,381 Lynn residents have recovered and 118 have died. The total number of confirmed positive COVID-19 cases in Lynn since March 21, 2020, including those who have died and recovered, is 4,936. Please visit the City of Lynn COVID-19 Data Dashboard which is updated daily.

Please visit http://www.ci.lynn.ma.us/covid19/resources.shtml#p7GPc1_2 for more information on how you can get a free COVID-19 test in the City of Lynn until October 31st.